This article is the third in the “Running your own DNS Resolver with MirageOS” series. In the first part, we used the ocaml-dns library to lookup the hostname corresponding with an IP address using its Dns_resolver_mirage module. In the second part, we wrote a simple DNS server, which serves RRs from a zone file using the Dns_server_mirage module.

As always, the complete code for these examples is in ocaml-dns-examples.

When writing our simple DNS server, we used a function called serve_with_zonefile in Dns_server_mirage to service incoming DNS queries. Now we are going remove a layer of abstraction and instead use serve_with_processor:

Now instead of passing the function a simple string, representing the filename of zonefile, we pass a first class module, satisfying the PROCESSOR signature. We can generate such a module by writing a process and using processor_of_process:

So given a Dns.Packet.t process, which is a function of type:

We can now service DNS packets. If we assume that myprocess is a function of this type, we can service DNS queries with the following unikernel

Now we will write an implementation of myprocess which will service DNS packets by forwarding them to another DNS resolver and then relaying the response.

Recall from part 1, that you can use the resolve function in Dns_resolver_mirage to do this. All that remains is to wrap invocation of resolve, in a function of type Dns.Packet.t process, which can be done as follows:

We will extend our DNS forwarded to first check a zonefile, this is achieve with just 3 extra lines:

Here we are using compose to use two processes: one called process generated from the zonefile and one called forwarder, from the forwarding code in the last section.

Next time, we will extend our DNS resolver to include a cache.

Here is a draft copy of the A1 poster I’ll be presenting at the 2nd Annual Oxbridge Women in Computer Science Conference in Oxford. The poster abstract is in a previous post. Any feedback would be greatly appreciated. 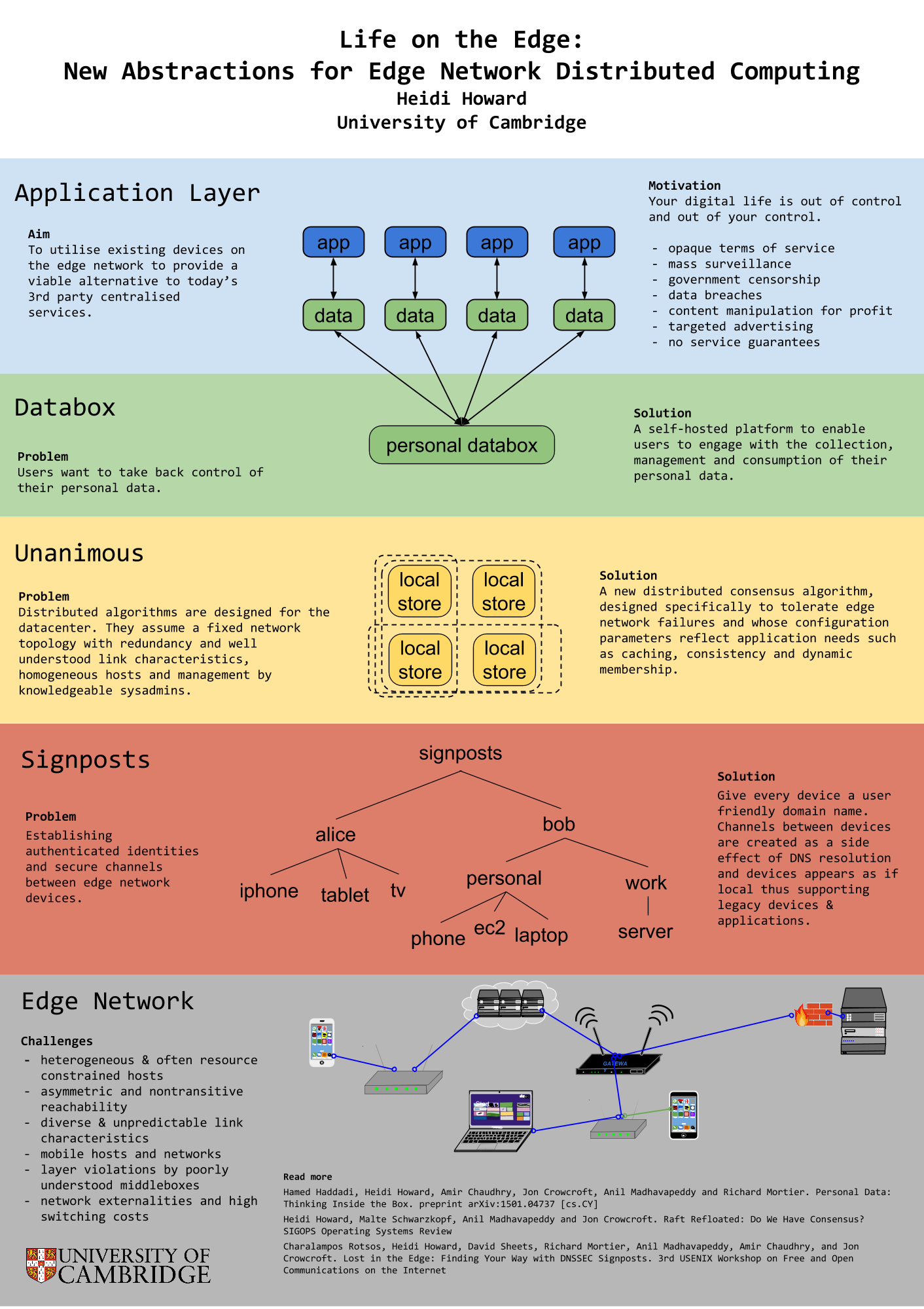 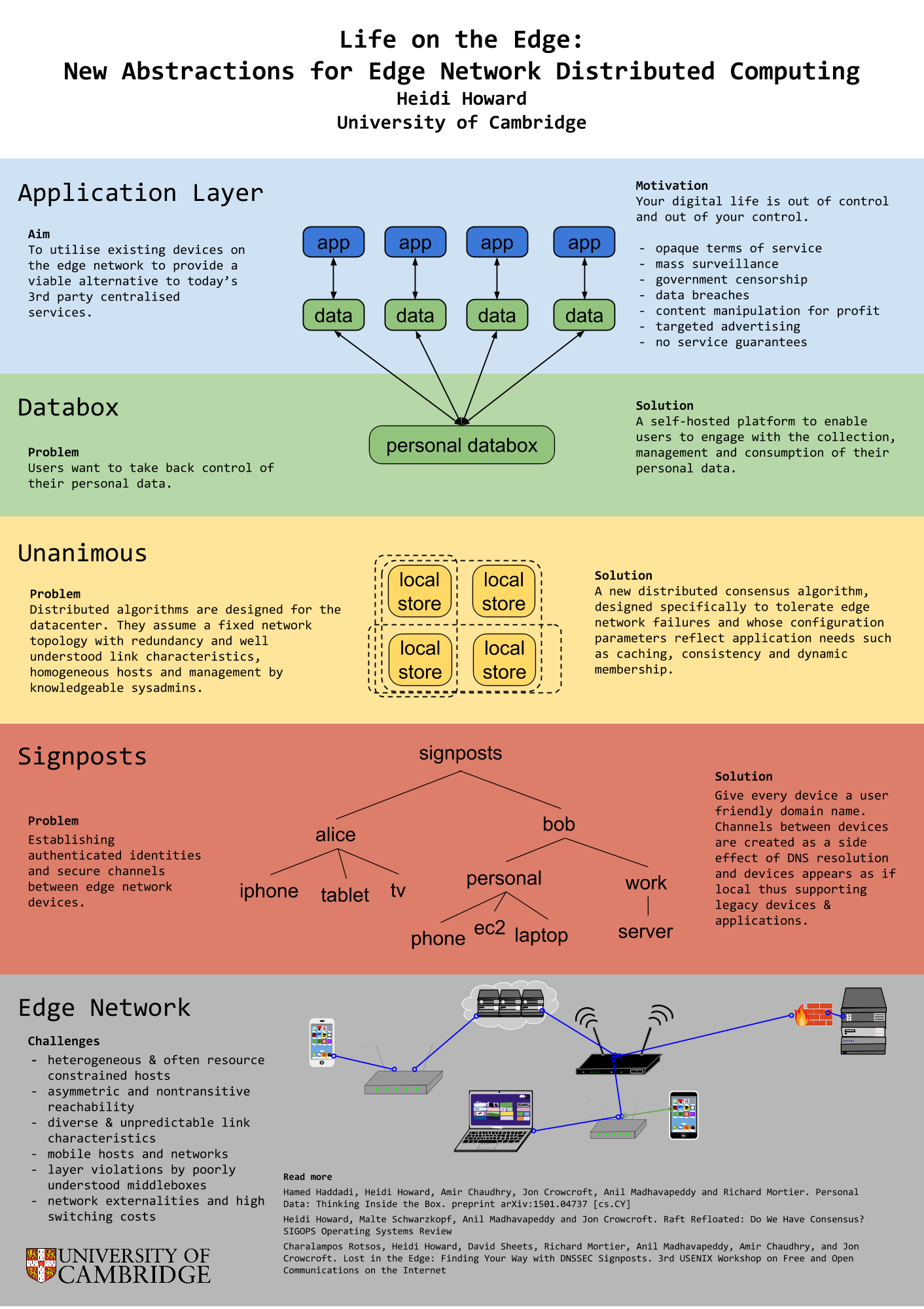 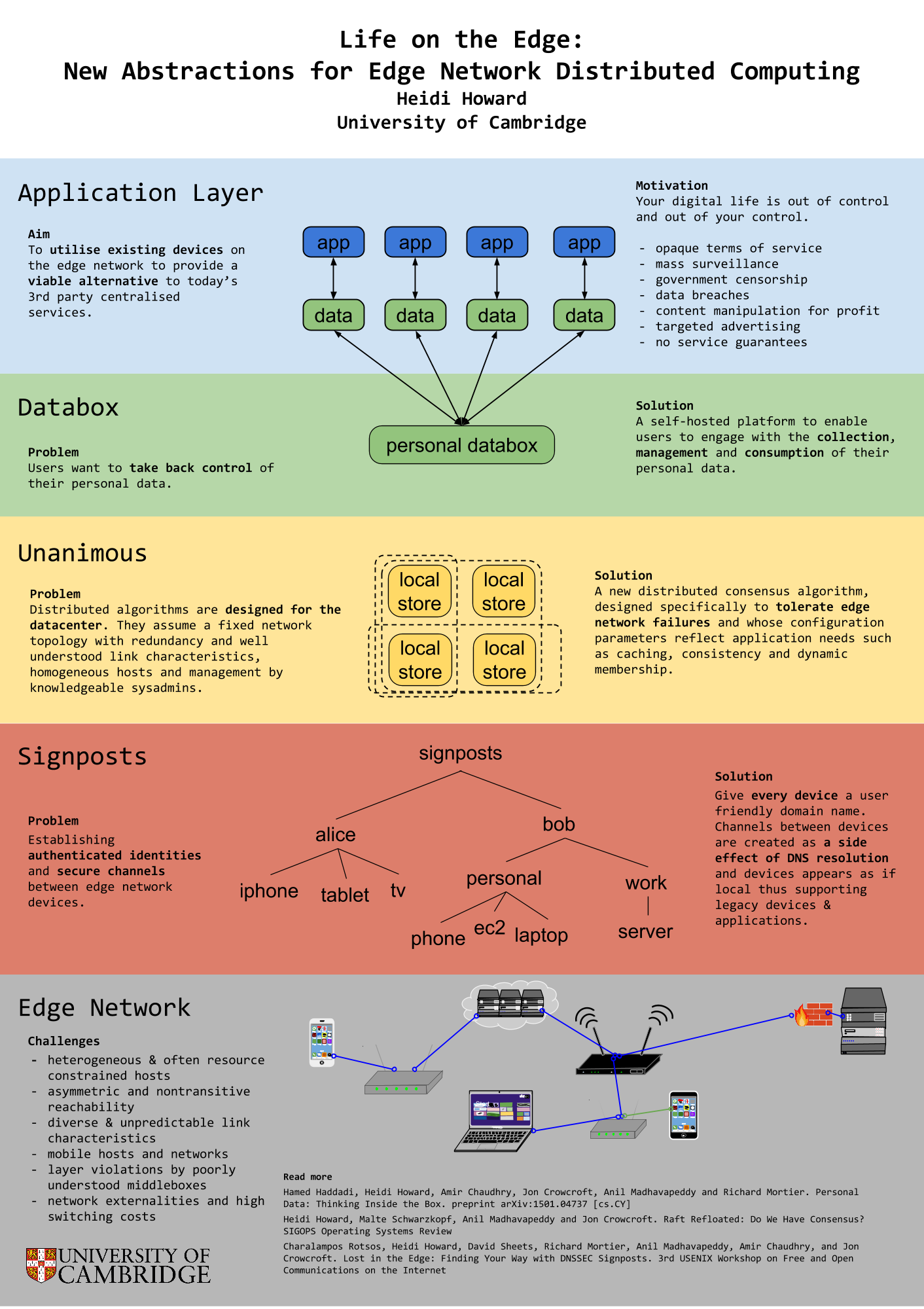 new text for the aim box 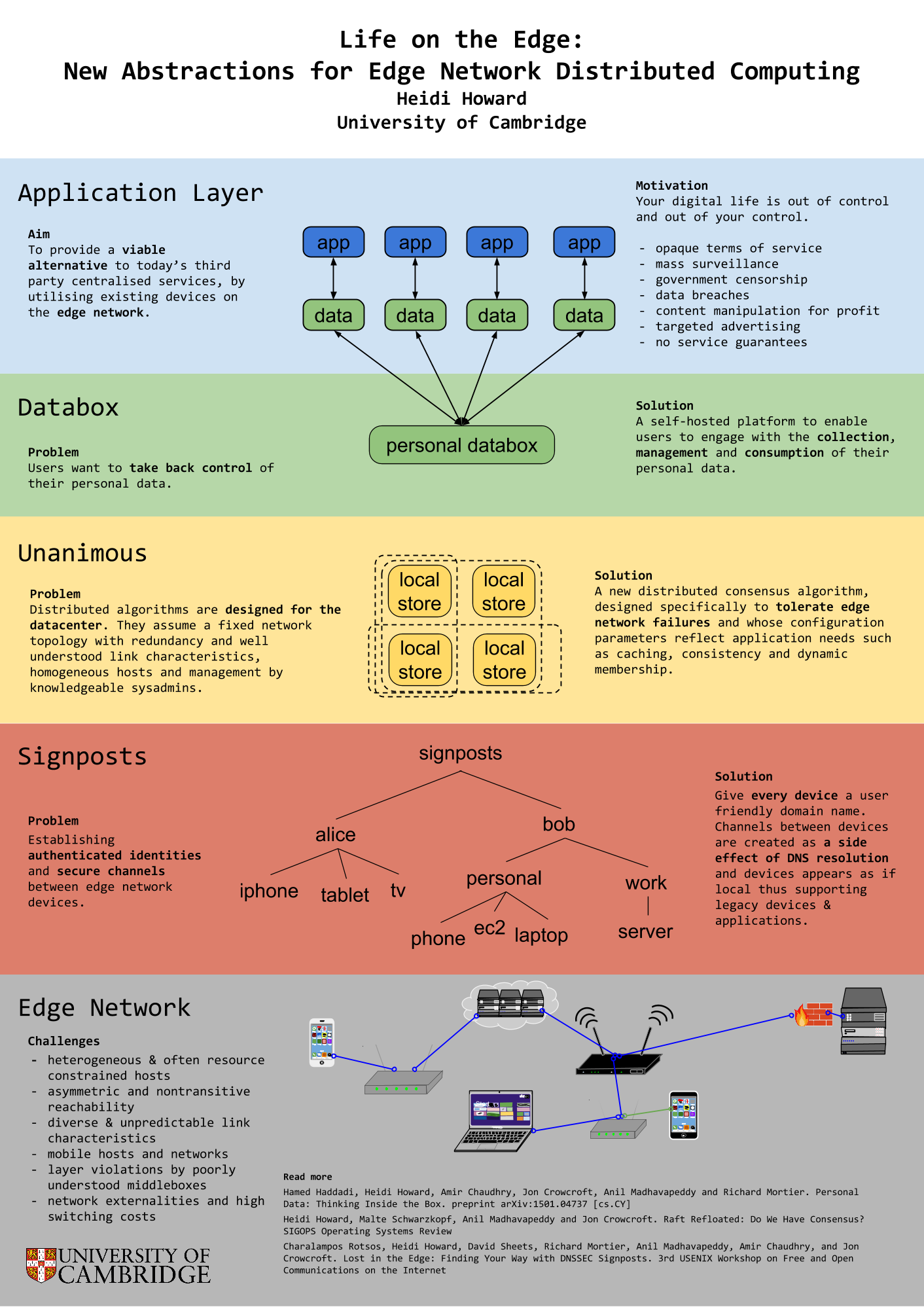 Below are my draft slides for next week’s talk at the 2nd Annual Oxbridge Women in Computer Science Conference in Oxford. The talk abstract is in a previous post. Any feedback would be greatly appreciated (note that the speaker notes are WIP)

Are you thinking of using a VPN to bypass DNS hijacking by your ISP (as described in Redirecting DNS for Ads and Profit and Middleboxes considered harmful: DNS Edition)?

A new paper titled “A Glance through the VPN Looking Glass: IPv6 Leakage and DNS Hijacking in Commercial VPN clients” by Vasile Claudiu Perta, Marco Valerio Barbera, Gareth Tyson, Hamed Haddadi and Alessandro Mei, demonstrates that many commercial VPN operators are at it too.

The paper will appear at The 15th Privacy Enhancing Technologies Symposium and is available online now (open access copy linked).

Redirecting DNS for Ads and Profit is one of the collection of papers from the ICSI team, with the results from the Netalyzr, network diagnosis tool. This paper focuses on the 66K session traces where DNS error traffic has been monetization and calls out Paxfire, for their role in this area, the paper focuses on NXDOMAIN wildcarding and search engine proxying (see my past post on how middleboxes interfere with DNS for an introduction to these techniques). The authors acknowledge the unrepresentative sample of Netalyzr users and the high number of sessions using OpenDNS or Comcast DNS resolvers.

NXDOMAIN wildcarding is not encouraged by ICANN and can have serious implications for non web browser DNS traffic (some resolvers only rewrite lookups starting with www. to try to prevent this). In many cases, redirection servers do not simply use HTTP 302.

The highlight of this paper was the fake NXDOMAIN opt-out offered by Paxfire, where the ad server simply served the user’s browser’s error page.

DNSSEC may provide authenticated denial of existence but this doesn’t necessarily fix the problem, for example Xerocole offers DNS resolvers with the option to simply rewrite DNSSEC signed NXDOMAIN responses without a signature, thus assuming the client will not validate DNSSEC.

OpenDNS wildcards NXDOMAIN and SERVFAIL errors as well as directing users to the redirection server if there server supports only IPv6. This is provided as an option in D-Link routers.

This paper is a fun, light read that I would recommend, though its results are a bit out of date now, as it used data from Jan 2010 to May 2011.