Making twitter fault tolerance may not seem like a priority at first thought, I mean surely in the unlikely event of the network failure, those 17 year of girls can will just have to learn to wait before they can tweet about there new jimmy shoes.

But if you consider further the situations in which network failure is likely to occur such as natural disaster, this is when twitter is needed the most. Here is an xkcd to illustrate the point

Its difficult, particularly if you didn’t grow up with twitter to understand why keeping social network alive in the event of a disaster is so important. But like it or not, twitter is just as essential in some peoples live than other (more traditional) communications form such as text messaging or TV broadcasts. In fact, it could be argued that since scarcity of information is often a problem for individuals in a disaster, the broadcast properties of twitter, make it potential more useful than  uni cast text messaging or voice calls.

The application to which has introduced this ‘disaster mode’ to twitter is called Twimight, its a open source twitter application with a couple of very interesting features. I’ve going to test out the application on my nexus 7.

The basic interface of the application is very similar to that of the standard twitter application but an exploration of the overflow icon highlights a range of features, that could be particularly useful in a disaster.

The basic idea of how this application aims to enable connectivity in a disaster situation is as follows: 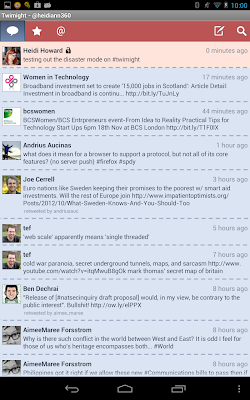 In case of a disaster, individuals do not want let any other peice of hardware to carry around but given that 3/4 of the world’s population now have access to a mobile phone and that twitter now has 500 million users, mobile twitter access has the potential to be a powerful force for good.

The UX is designed such that its simple to use in a stressful situation, with the user enabling the ‘disaster mode’ in the application with a simple check box (though this box is a little harder to find than I would ideally like)

Before Bluetooth can be used for the automatic spreading of tweeter messages, the devices must be paired, those potential irritating to the user, this is essential to allow the application to make up of the bluetooth protocol.

Power consumption is important considation for all mobile applications, in this case it is particularly important as its more unlikely that users will have access to pwer supplies and suitable chargers. In ‘disaster mode’ the use of bluetooth much therefore be considered carefully. Bluetooth scanning time need be as high as possible to increase the speed of the transition of tweet, whilst using minimal battery life. The power saving heretics for Twimight are set so that the scanning interval is  reduced when battery is less than 50 % and scanning is stopped when battery is less than 30 %.

This application will not be able to reach this critical mass, because individuals will not have the foresight to install such an application, “just in case” they were to need the disaster mode it provides.

Consider instead, the hypothetical case that twitter was to adopt such a “disaster mode” into its own supported mobile application.

The official twitter application has 578,194 downloads from the play store and 500 million activated android devices. So twitter and android are powerful platforms but with a typical bluetooth range of 10 m and the requirement for pair devices, is bluetooth really the best wireless protocol for this use

Tsukuba is a city of 200,000 located in Ibaraki Prefecture, Japan. Tsukuda lost electricity, communication networks and water immediately after the Great East Japan Earthquake of March 2011. The lack of power meant that smart phones became key devices for communication. Muneo Kaigo has written an excellent Keio Communication Review, examining the use of twitter in Tsukuda in the 7 days following the earthquake and I thoroughly recommend it