Today’s OCaml Labs Monthly Meeting is all about practise talks for OCaml2013 so in that spirit, I’ll practising a bit of live-blogging too.

introducing Gabriel Scherer who is visiting us this week and going we are going to Maypole after this meeting. We had a cash prise from ASPLOS after winning the HiPEAC paper award and the money will go towards SRG wine for XMAS party. Signpost paper was accepted to FOCI and a HotNet paper on Trevi was also just accepted

OCL Website – Too much manual management at the moment, moving to an ocaml planet feed of blog posts. David has been busy hacking on OPAM2web, OPAM has 512 packages, Opam2web takes a subset of the OPAM packages and makes the metadata into a minisite, like on OPAM. Doesn’t require manual updates, like an ATOM feed.

Upcoming events – Tomorrow is the 2nd compiler hacking event, at the makespace. Anil will be talking at QCon on Mirage, Mirage 1.0 release date is October 22nd, so maybe a workshop before. We 3 talks for Ocaml2013 (Platform, OcamlOT and Ctypes) so here we go …

Languages take many difference approaches to platform, but what does platform even mean? As a late mover in this field, we can learn from other languages. A platforms is NOT a group of temporarily motivated hackers to build a replacement standard library. Its hard to adopt a particular approach without a domain specific purpose, there are too many opinions, we need objective way to determine what belongs in the platform, we need a genie community that is sustainable (even if a large party leaves). A platform is a bundle of tools that interoperate, with quantitative metric to judge success, built in agility and supporting developers thought the whole development life cycle. Industrial partners have a range of needs, as each work in different domains.

IDE Support – OCaml has many intermediate files. In OCaml 4.0 onwards, we have a binary format of an abstract syntax tree with type annotations called cmt (and cmti for interface files), we can now create external tools to query this like opam-doc. ocp-index and ocp-indent from OCamlPro, and Merlin (I thinks this is EPIC) are also now available

opam-doc – Now we have cmt files, we need unified documentation across packages, this is much harder than it sounds as it touches every part of the tool stack. Not all packages can be installed at once due to conflicts. Module inclusion is tough to code in static html. (Need to make a demo) bindoc takes the Typed AST (in cmt) and generates cmd, which include the ocamldoc comments, Opamdoc takes the cmt database for opam and output a single website with your universe of packages.

Now we have the tools, what metrics can we extract to see how well our tools are doing.

Maintainer – is there a place for docs and will people response to issues/comments/emails, where can issues be submitted ?

Stability – OPAM support pining, how stable are the interfaces of libraries ?

Agility – Building a platform is EXHAUSTING. We want to ask “WANT IF” questions: what if let was monomophic? what if we removed camlp4? what is the syntax precedence changes ?

Distrusted workflow – build on git, distributing tasks between 3 actors: Author (library writers), OCamlOL workers and maintainers. As we become more stable we move from staging to stable to inclusion in the platform.

We are building a tussle, we want to launch a game in janurary and let people put standard libraries into the ring, running OCamlOT to discover the winner

16:36  Discussion over the battle of the standard libraries and talk feedback

C: OPAM was dicussed last year at OCaml2013, we want to update everyone and follow on without overlapping too much

A: No, we use all of them, i.e. Mirage used lwt extensively

Q: What if we don’t want any of the new standard libraries ? maybe I just want to use domain specific libraries from OPAM as and when I need them

A: We are not forcing the new standard libraries on anyone, but they are useful for beginners, nice to have consistent style, interoperability and few open statements e.g. Open Core.Std

Q: What if I have already decided which standard library I want to use ?

A: Again we are not forcing standard libraries on anyone, we are just trying to force effort more directly. OCaml tools will always be standard library agnoctic

C: the diagram of OCamlOT is confustion

C: how to not overlap with david talks

Outline: what is quality software? what is the user experience? what is feedback loop for package authors? How do we represent the thing underneath this all? utopian future ?

Quality: Work on every core (ANIL: We want multi-core 😛 ), consistent results: work or die nicely with obvious solution, not more “What have I forgotten?” questions, it should just tell you. We need addictive actions (not sure what they are), consistency, quality functions…

Workflow: Make a pull request, curator observes the proposal, predict the future, proposes amendments, feedback loop and finally agreement is reached. Core is release weekly for example, we are trying to work like linux kernal patches

Repository Observation: github binding with web hooks but we are not tied to github. We merge into the world and we need dependences from each possible users prospective of the world

Triage Decisions: taking plain text error and parsing them into categories such as unsatisfiability (can’t have these two packages), dependencies (if my dependency is broken, then I am broken), transient (network down), system, metadata, external dependences (you forgot to write a dependency), build errors and a combo of many of the above.

Internet res: The agents negotiates over REST API on HTTPS, independent metadata layers (not sure about this) ,everythings an s-exp, branch consistent store explained, like git or Irminsule

Current state: github web hooks, we are conservative so one byte changes and we rebuild everything, basic triage heuristics completed, no amendment are proposed by the system atm, we don’t commit the outcome but the evidence, simple reactions to results, a website with green and red boxes in the large table

History: we have found lots of metadata issues, many packages bugs, some tool bugs like a non relocatable compiler and ocamlbuild PATH ignorer, we currently have 30+ x84-64 30+x84-32, 8 ARMs , many Linux distros , dead Raspberry Pi, panicking *nix filesystems and lots of people have set warning as error

What I think quantity is, vision of the future, how its represented underneath and what’s next,

C: that was 20mins, feedback to David regarding content to be cut,

This is a update not a practice talk

An examples of puts from C, how we can write no C and link in OCaml,

NEW things in Ctypes:
prettyprinting – for C types and C values, making it much eaiser to examine values for debuygging

finaliser – which you can attach to memory

stub generation – instead of dynamically binding, it will generate stub code to act to the API

capability-style memory safty – one rogue pointer in a C library, can cause hell, loading each C library in a seperate address space so i library can only kill itself, you can then even run on C library on a foreign host or on a virtual machine 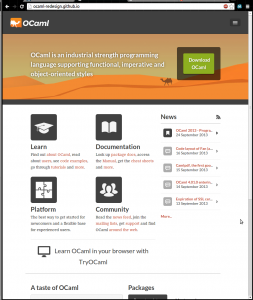