It’s official! Fast Flexible Paxos: Relaxing Quorum Intersection for Fast Paxos, my latest collaboration with Aleksey Charapko and Richard Mortier will appear in next year’s edition of the International Conference on Distributed Computing and Networking (ICDCN). If you don’t want to wait, then the paper is available right now on Arxiv and in the next few paragraphs, I’ll explain why I think this short paper opens the door to some exciting new directions for the future of high-performance state machine replication protocols.

State machine replication (aka SMR) is a widely used technique for building strongly consistent, fault-tolerant services by replicating an application’s state machine across a set of servers and ensuring that each copy of the state machine receives the same sequence of operations. This is the primary responsibility of an SMR protocol such as Paxos, Chubby, Zookeeper[1] or Raft. SMR protocols are often criticized for performing poorly. Typically distributed systems opt for weaker consistency guarantees and reserve state machine replication only for the most critical aspects of a system such as managing metadata, distributed locking or group membership.

Various SMR protocols have been proposed to overcome the leader bottleneck. Some allow any server to directly replicate operations, without first sending them to the leader. I will refer to this as fast replication. The first protocol to support fast replication was Fast Paxos, which was proposed by Leslie Lamport in 2005. 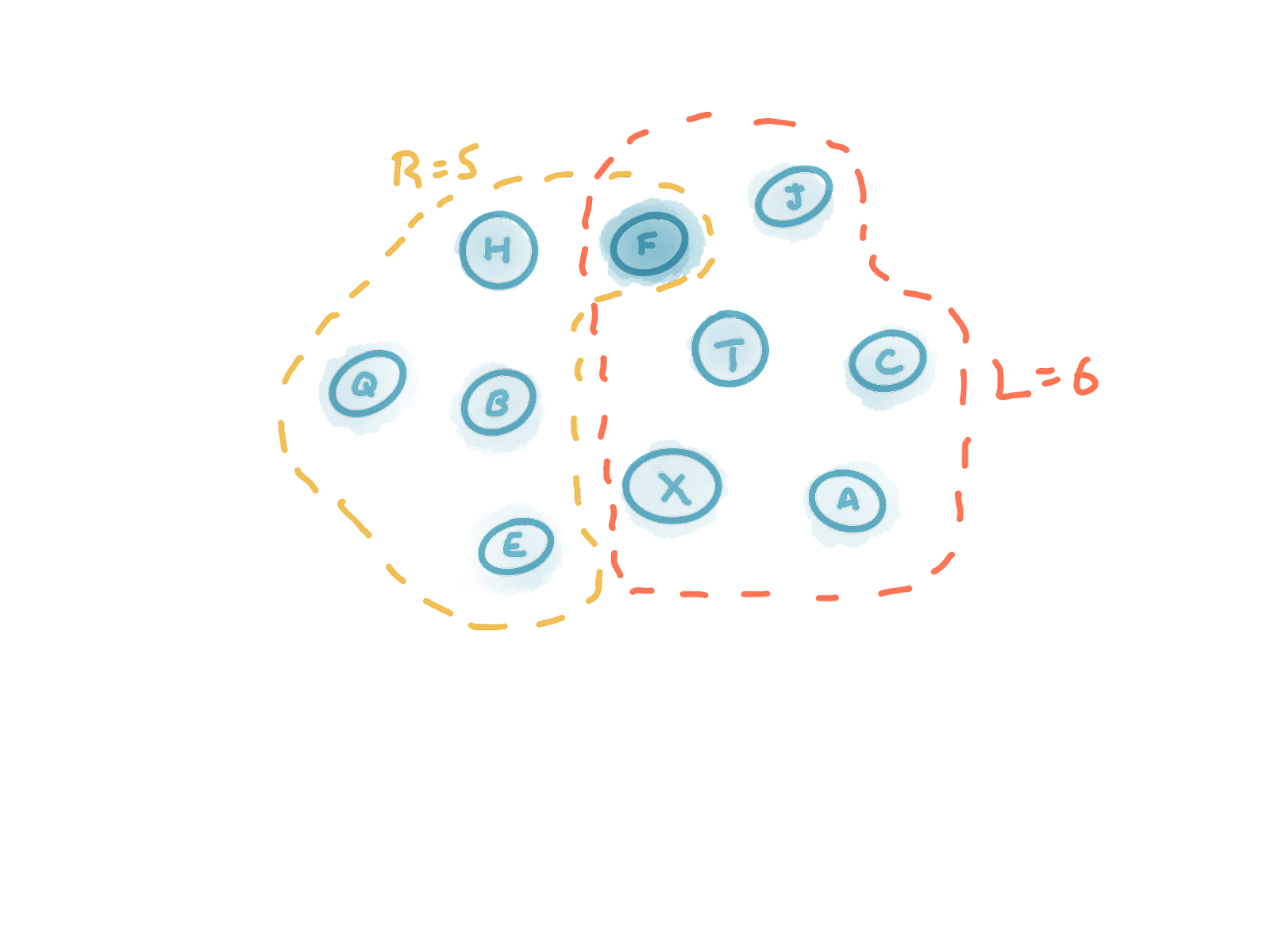 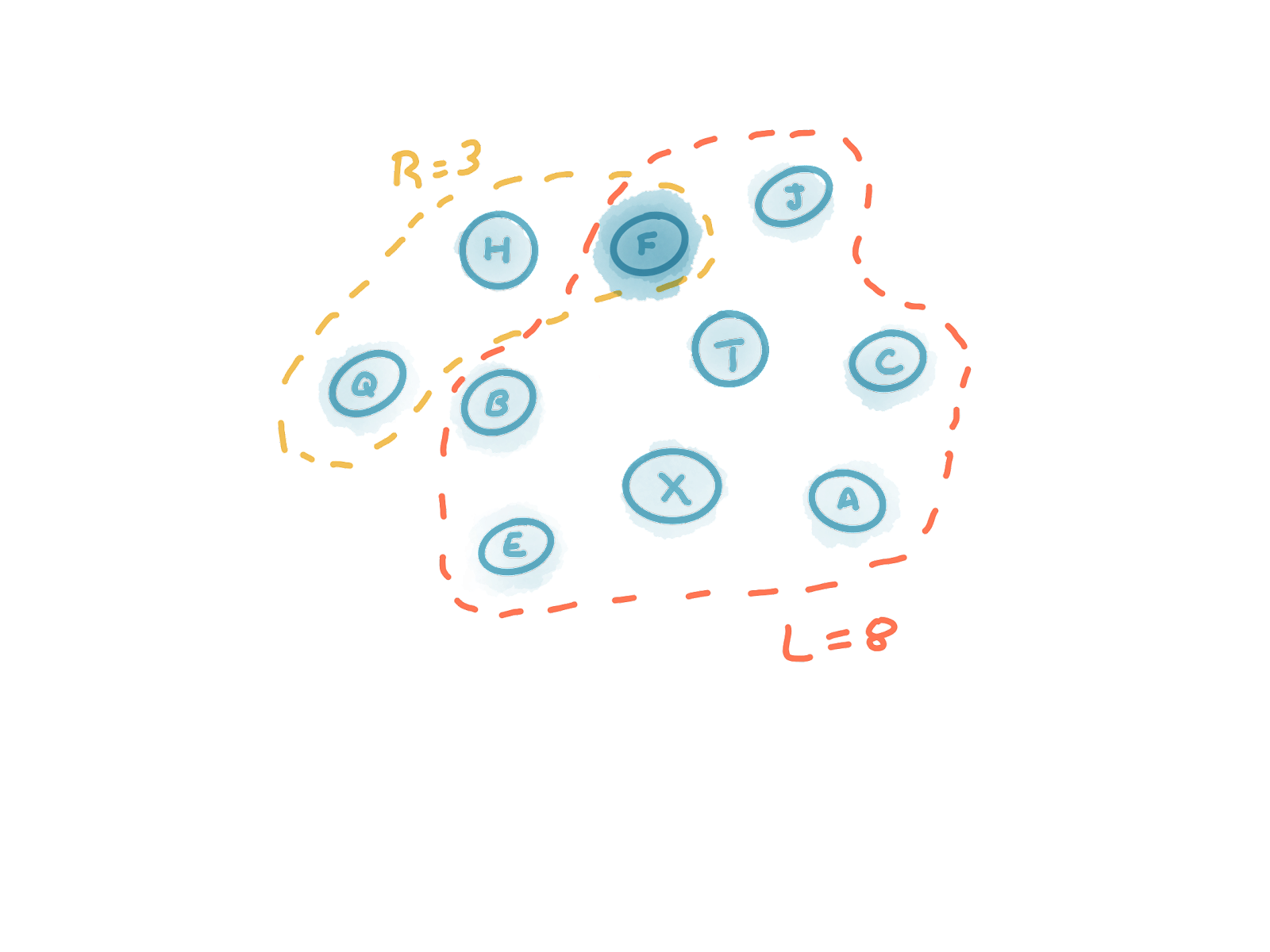 Note that we could not use R=3 and L=7. Our equation ensures that L and R always overlap by at least one server.

Consider the previous example where N=10, R=5 and L=6, our second equation requires that F=8.

Note that it would not be ok to use N=10, L=8 and F=6, regardless of the value of R, as this does not satisfy our second equation. The second equation ensures that L always overlaps with any pair of Fs, as shown in the diagrams below.

As always with distributed systems, it is a matter of tradeoffs. In the most extreme case, we can use majorities for fast replication in Fast Flexible Paxos but this will not be able to tolerate any failures as it requires that L=N if N is odd.

[2] ¾ is only required to tolerate the same number of failures as Paxos with majorities.

[3] There is another issue with fast replication which is that conflicts can occur when multiple servers try to replicate different operations at the same time. Subsequent protocols like Generalized Paxos and Egalitarian Paxos mitigate this.

BPFT makes strong assumption about these arbitrary failures. Notability that at most f failures will occur in a system of 3f+1 nodes, this bound applies to both safety and progress guarantees. In contrast, in typical paxos style consensus algorithms the bound of f failures in 2f+1 node only applies to progress guarantee, safety will always be guaranteed even if the system is not able to make progress. BPFT makes the usual asynchronous assumption, common to many consensus algorithms.

Section 4.2 describes the algorithm in details, the core idea is that once the nodes have been made aware of the request for a given log index, they under go a two step process where each node notifies every one of their agreement and proceed when at least f+1 nodes in the 2f+1 responses also agree. At end of the second stage, the client can be notified. Likewise, the view change protocol is a similarly enhanced version of view change from VRR.

PBFT in an interesting read and an excellent contribution to consensus. However, I am not sure how common it is that a modern datacenter might meet assumptions laid out by the paper, in particular that at most f nodes might be faulty in a system 3f+1 nodes. In this environment, nodes are usually running a same OS, configurations, software stacks and consensus implementation. Thus if an adversary is able compromise a machine then it’s likely they can compromise many, thus failures are very much dependent on each other. Lets see if the 17 years of research since has been able to improve on this.

The videos of my talk and interview at this year’s J on the beach are now live and embedded below.

Just like humans organising to meet for coffee, computers need ways of organising themselves. Heidi Howard, of the System Research Group at University of Cambridge explains the basics.

I asked a question on today’s BBC radio 4 show “Any questions?”, http://www.bbc.co.uk/programmes/b06b3ny4, skip to 42:07 to hear me nervously ask “How can we protect the rights of citizens in an increasingly digital world?” and hear the panel’s response. The responses where fairly disappointing but it helps to keep the debate alive.

In this post we will be looking at the results for the Azure latency Pilot study described last week. Yesterday, we started by looking at the aggregated results and found that the measured RTT was larger then expected. Today, we will look at how the results vary depending on which VMs the measurements where taken between. It may be the case that we can infer something about topology between VMs, for example whether VM’s are in the same physical host and the same rack.

The table below shows the RTT between each pair of VMs. The first server in the pair, labelled src is the one which initialised the ping. The table includes each machine pinging itself for comparison.

All VMs other than VM 2 have high latency to VM 1. In fact, we see an average 65 ms RTT from VM 1 to itself. This warrants further investigation into how hping3 is measuring latency. Removing VM 1 from the equation, we observe reasonable uniformity in the RRTs between VMs 2 to 5. Between these the min, 25th, 50th and 75th percentile are all similar and the maximum varies highly, which is to be expected.

I would like to take a close look at how the distribution of RTT measurements varies between VMs 2 to 5. The table below shows the RTT between each pair of VMs between 2 to 5, at various percentile points.

Yesterday, we saw that the 90th percentile for dataset as a whole was 61.4 ms, this is not representative of the RTT between VMs 2-5. We can see this information more clearly using the following 5 CDF, each graph representing the round trip time from each machine to each of the others (and itself).

Machine 1 is a clear outlier from the perspective for machines 1, 3, 4 and 5. The observed RTT doesn’t seems to be symmetric. Again this asymmetry warrants further investigation. The stepping in the CDFs is because the RTT is recorded to the nearest 1 decimal place.

Next time, we will look at how the observed RTT varies with time.

The 22332 data points have been processed in Python3, in particular using the matplotlib and numpy libraries. The scripts are available in azure-measurements repository.
They currently only use the average round trip time, as reported by hping3, average over 10 pings.

The results in the table above are much larger than I expected. Given the large standard deviation and very large maximum value, it is likely that a few large measures have skewed the results. Let’s take a look at the cumulative distribution function (CDF) and percentile points to see if this is the case.

As expect, some large measurements have skewed the results. However, the proportion of measurement which are considered large is much greater then I expected. This warrants further investigation.

Before that, lets take a closer look at how the majority of value are distributed. Due to the central limit theorem and the sufficiently large sample size, we would expect to see a normal distribution. In simulators such as Raft Refloated, we simulate latency as normally distributed with given parameters, discarding values below a threshold value. We can take a closer look at the probability density function (PDF) and see if this is a reasonable approximation.

The green bars represent the probability of each RTT. We see an approximate normal distribution, although it is clear that this distribution doesn’t have the same parameters as the data set as a whole. The red lines shows a normal distributed with mean 3.6 and standard deviation of 1. This red line appears to be a reasonable approximation and could be used in simulation.

Next post, we will looks at how the measured RTT differs depending which of the 5 machines the measurement was taken between.

Thanks to Justine, at the excellently named Lavender Martini Border Gateway Protocol for sharing a link to this blog post on Prospective Students and Lab Culture. Useful food for thought, not just for Part 2 students.